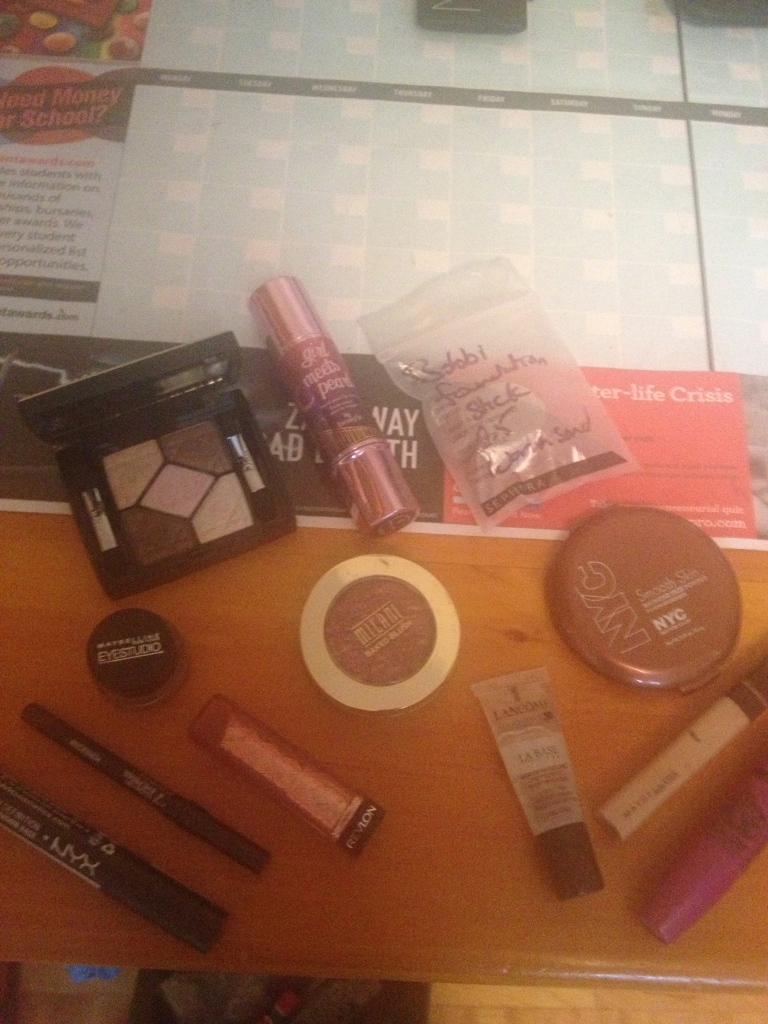 It can be difficult to muster the energy to put on makeup and wear some sort of semi-appropriate outfit when you have to be out the door on Monday mornings by 8:15 and you’re swamped by work and stress, along with being perpetually sleep deprived. Even though I’d rather hit the snooze button, I find myself reaching for a few products – I suspect this is because I get an unhealthy amount of enjoyment from makeup and use wearing makeup as justification of wearing lazy-day outfits every day while looking somewhat presentable and alive. So here is what happens on a typical day (when I’m not running uber-late) in order to feel somewhat polished but I’m not one with qualms about not wearing makeup and rocking the fourth-day-hair messy bun… end ramble.

My skin has been even more dull than usual, dry,red, sensitive and somewhat flaky and uneven which tends to pose some difficulties on the foundation front. I do generally suffer from foundation sitting on my dry patches awkwardly and its even worse this time of year. Although I’m a skeptic on the facial primer front, I’ve been trying out a few of my primer samples from Sephora and am trying to see if it helps any, as people always seem to claim it does. Today I used Lancôme La Base Proand it seemed to help the foundation glide over my drier spots (most of my face at the moment) to a small degree.

I would normally just whip out my trusty Bourjois 10 Hour Sleep Effect but my skin is too dull and red for that to be enough today – my skin is getting back at me for late nights and subjection to stress. I’ve heard that Bobbi Brown Stick Foundation is one of the rare ones that can provide great coverage yet not highlight dry patches and her shades run so dramatically yellow that they do tend to neutralize the redness in my skin. I’m always nosy to find out what shade other people wear in foundation so I’m feeling compelled to elaborate that my shade is 2.5 Warm Sand. The coverage was medium buildable and struck me as a foundation like LM Silk Creme but better for those with drier patches – it didn’t completely hise dehydrated patches but it did not emphasize them by any means – and I would say they were less visible than when I wasn’t wearing foundation so colour me impressed.

I’ve kind of gotten addicted to tightlining my eyes with Urban Decay 24/7 Waterproof Liner in Perversion daily, even though it tends to irritate me when it smudges onto the bottom waterline despite my best intentions for it not to but we can’t have it all – It doesn’t irritate my sensitive eyes and actually stays put. Some migrated to the lower waterline and I couldn’t be bothered to remove it. I did this before my NYX HD Eye Primer because I find it has a really siliconey feel that tends to make creamy products migrate until it dries completely.

For eyeshadow, I started with NYC Sunny Bronzer in the crease and then finished with my latest obsession, the Dior Earth Reflection Quint (expect a review soon!). I used the iridescent golden champagne across the lid and the pink in the inner corner, a little bit more of the taupe shade in the crease and the darker taupe shade in the outer-v. The shades have great pigmentation, texture and longevity and the shades are in the golden taupe sort of family. I felt compelled to whip up a wing with Maybelline Gel Liner. I recently picked up Maybelline The Falsies and I remember why I love it so much. It’s my favourite mascara and creates the best thick lashes.

I ended up being quite a fan of the rosy Milani Red Vino on the cheeks (along with some NYC Sunny to contour … who doesn’t love contour?) and went for something easy on the lips with the browny-rose Revlon Pink Truffle Lip Butter.

That’s got to be one wordy daily makeup post — any thoughts?