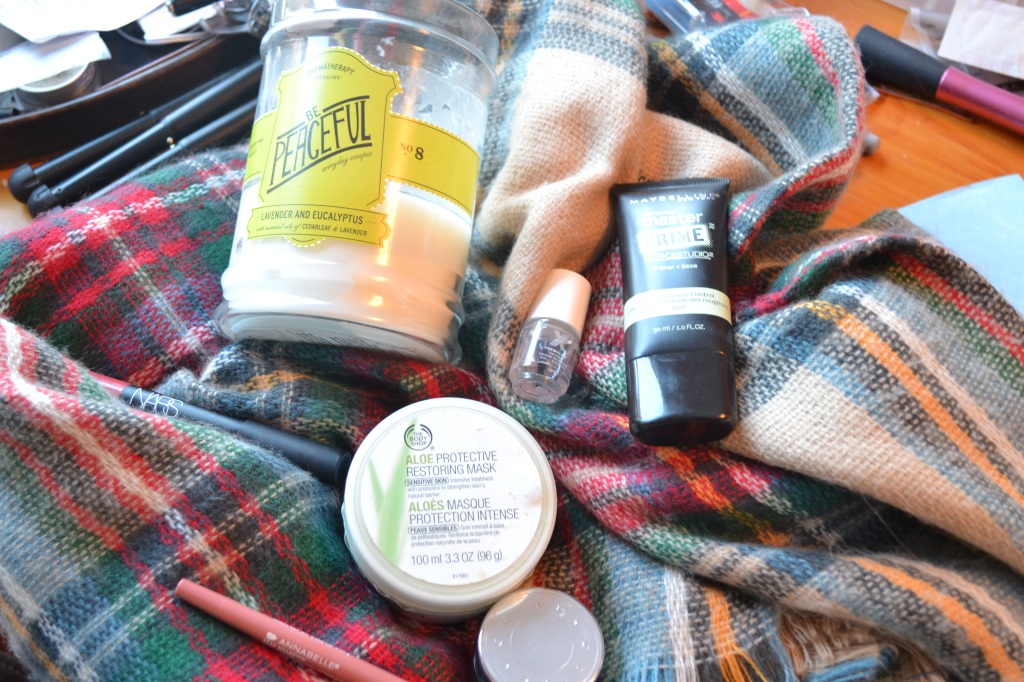 I seem to be saying this loads (but it’s not exactly surprising considering that I’m your typical ranting stressed university student), I’ve been stressed and laden down with assignments, essays and such in particular this month. With all the deadlines and such, the hectic month sped right by and while I do have some rather exciting products to share, there was nothing particularly time-consuming or interesting going on in my makeup in February. I will warn you that the products seem to follow a theme, dealing with the crazy winter full of storms and general freezing weather. We’ve had snow and then some more snow with some freezing rain thrown in and my skin has been dry and a wee bit more delicate and has been looking more than a tad bit dull.

Throughout February, I often found myself burning and enjoying this uber-calming eucalyptus and lavender scented candle. It has a strong enough throw, even though it’s toted as a stress-relieving candle but it’s not overwhelming even in my rather small bedroom. I’m definitely sad that Target is leaving us in Canada, just because I will no longer be able to get a hold of this candle…

A while back I redeemed my Sephora points for a sampling of Sephora’s house brand’s nail care offerings and now that I’ve tried the duo and paired it with other polishes, I have to say that they are absolutely fantastic. I was into painting my nails in February and tried four or five polishes but I appreciated having this duo that kept polish on my nails for a notable long time without being a hassle in the first place. They work actually at keeping nail polish nicely on the nails for a longer period of time and have proven themselves worthy of the slightly higher price tag.

Even though I am one of those generally perpetually stressed human beings, I’m someone whose stress levels become easily visible in my skin. Considering the stress I was under (not that I’ve entirely escaped from it) and how cold and snowy the weather we’ve been having, it should not be a shock that my skin was in need of some soothing, revitalizing and hydrating action – and this was the mask that checked all of the boxes. There’s nothing remarkable about this mask other than just how soothing and non-irritating it was, which is a good thing considering that if there was anything remarkable ingredient-wise, they would not function properly in the jar packaging. It’s also impressive on the hydration front without being heavy. I actually wore this on some mornings, both by itself and under makeup…

I have absolutely nothing of merit to contribute about this supposed redness-reducing and smoothing silicone based primer. I haven’t experimented with it enough and compared its effects to the effects of others (and no primer) and I haven’t seen a major difference but I have really enjoyed how this primer smooths the skin and helps foundation lie nicely on the skin and stay fresh for even longer while having a nice creamy texture that reaps the benefits of those silicone primers while having a more moisturizing base. It is green but I’m not really noticing any sort of color correcting effect.

While I haven’t gotten my shit together and organized my recent lip product buying spree at Target into a post, – it’s coming, I promise – I couldn’t talk about my monthly favourites without talking about this rosy liner with a hint of brown to it. It’s quite similar to my beloved Annabelle Lipliner in Demure – I have no idea how I didn’t realize this when buying it – but I have to say I slightly prefer the formula and colour of this one, as it’s creamy but even longer-wearing and has a stronger rosy hint to it along with some more depth. Despite being waterproof (which I generally associate with being drying and unflattering) and having a self-sharpening mechanism (which I never seem to have to have success with), this liner has impressed me majorly. It wears for ages and ages without being a problem for my mega dry lips and went with both my nude lipsticks to add some life to them and deeper shades.

After the above lip liner, this was easily my most loved lip product of February and although I knew that I enjoyed the comfortable matte formula and the gorgeous true rose hue as soon as I got this in the mail months ago, February was the month that I fell in love with it. Being a shade that flatters with its warmth, sitting halfway in between a neutral lip colour and a true berry, Dolce Vita was a shade that I could throw on with even the most minimal makeup looks and look pulled together and throw on with anything.

The glowier-than-glowy muted berry shade was ideal for February when I was not willing to put any sort of effort or time into my makeup application and my skin was looking drier and more dull than one would desire. The souffle formula almost seemed to blend itself with ease and the highlight built in was intense, illuminating and all kinds of wondrous. I love this formula an awful lot, I have to tell you, and I kind of love the whole marbling highlighter with blush colour situation. This was yet another shade that seemed to effortlessly add that warm glow to my face.

And lastly, my Garage Tartan Scarf deserves a shout out but considering that I got it as a Christmas gift and its no longer available in stores or the website, there wasn’t really a point lingering on it for too long. What were you loving in February?