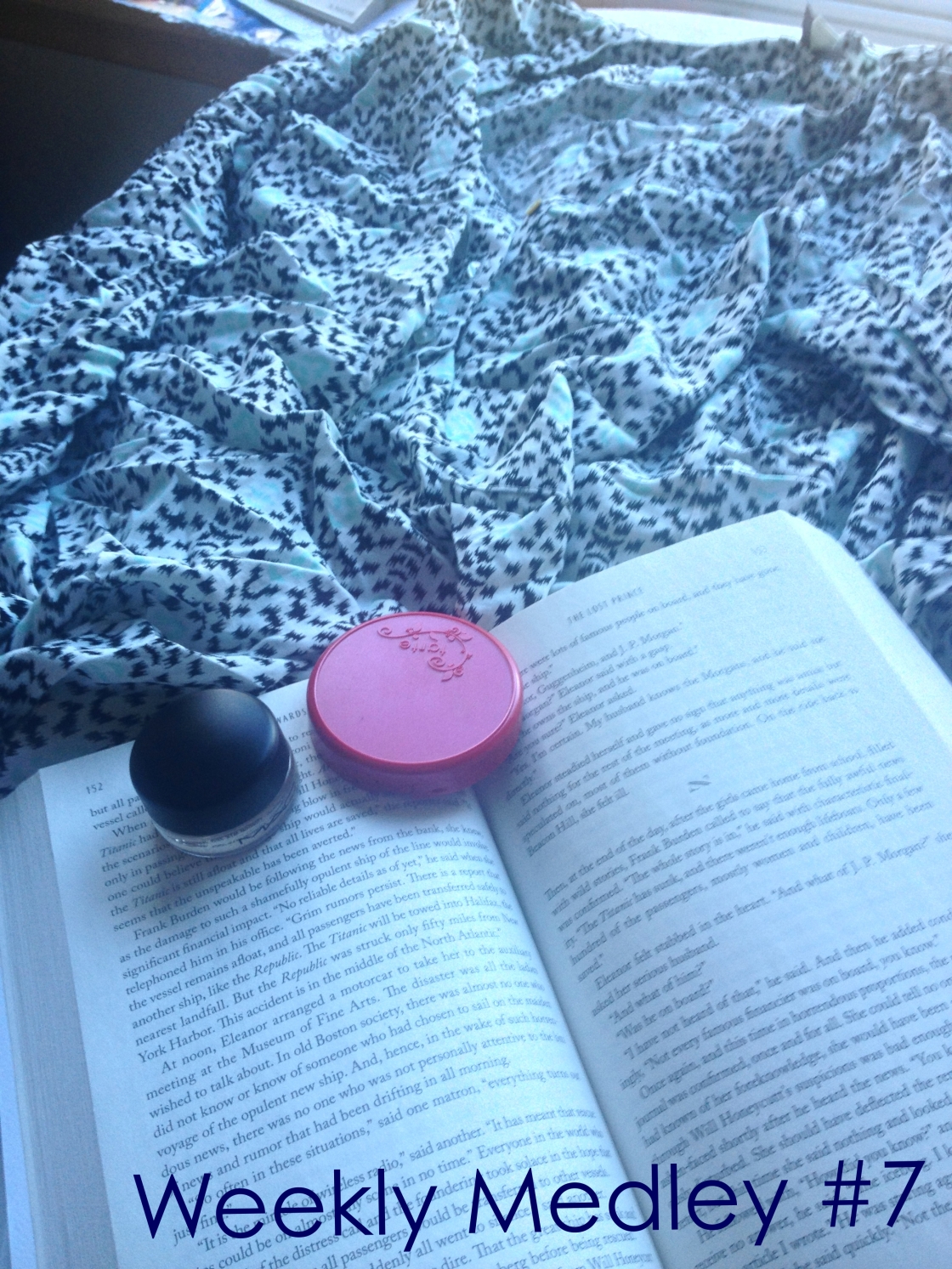 Since beginning this series close to the beginning of the year, I feel like (and I’m fairly certain of this intuition) I’ve been consistently rambling on about the woes of being a stressed university student suffering from nothing other than sleep-deprivation but judging from the response here, you’re enjoying these more random life-centric posts and I’m glad. This week was a bit of a breather in a sense for me, although I still had to do the usual bump and grind but I managed to sleep in a way that resembles a functional human being. Interestingly enough, with getting a bit more sleep it’s been even more difficult to get up in the mornings and the routine could only be described as rushed. Hey, I’m not complaining – but unfortunately my productivity will need to greatly increase next week.

I had a few hours to kill in town and after I studied in the library until I wanted to scream and then hit the mall and did something shocking – bought things that were not entirely beauty related. Without making a conscious decision to do so, I had realized that it had been ages and ages since I did any sort of clothes shopping and it might be because of guilt from spending too much money on beauty-related products again but I also haven’t been in the mood. As I’ve said before (99.9% sure), I am someone with an interest in fashion and the desire to look polished (in an effortless manner) but I’m someone who picks comfort over all and tends to throw clothes on in the morning without any sort of thought and I’ve realized that the pieces I love and should invest in are those that satisfy these two different philosophies. So, I’ll attempt to get to the point now: after popping into Dynamite, a Canadian-based store (that ships to the US and also has stores there as well, I believe) that I don’t own a tremendous amount of clothing from, I spotted this breezy bohemian blouse in the floral-but-not-girlie print. I’m someone who really loves the look of blouses but can sometimes find the material rather uncomfortable but this one felt really soft. Also, I was pleased that I could size up in this for less of a slim-fit without the rest of the dimensions swallowing my small-boned frame. If anyone is interested for comparisons sake, mine is a size medium and it comes in a few other colours as well and some of the other colours appear to be on sale as we speak. This is a typical clothing-love of mine, comfortable, slouchy and effortlessly pairing with slim-fitting bottoms. Oh and I think this is a blouse you can actually wear if you have boobs, if you catch my drift. And it’s actually called the button-down blouse and retails for $32.90 CDN.

Keeping with the non-beauty theme, I finished a book this week; if you’ve been following me for a while or know me in real life, you could probably gather that in itself this is not entirely shocking but as I’m studying English in school, reading another book amongst all my readings is a feat in itself. Although The Lost Prince, written by Selden Edwards is not a novel that you instantly can’t put down. I had been reading it a month ago and was a few hundred pages in and put it down because I wasn’t compelled to finish it. The thing about this novel is that the backstory is mysterious and complex and until you near uncovering it, you can’t quite figure it out but that is the point, I think. I ended up picking the novel back up a few nights ago and finishing the entire thing in mere hours and being as critical as I am, I really ended up enjoying it. It was one of those books that was the perfect mixture of interesting to read and compelling while still having some sort of meaning to it. The main character has premonitions of when events will happen in her lifetime but the author deals with it in a very realistic way and sets it in a historical timeframe with individuals such as Carl Jung without sacrificing it as a whole. The ending was satisfying and tied all the ends together that were puzzling throughout. If this sounds like your cup of tea, I would highly recommend giving it a read.

As someone who never accomplishes a significant portion of what I set out to do, I was actually somewhat satisfied with writing five posts over the last week or so and despite the haul-esque posts being out of my comfort zone, I was pleased with how they turned out and I’m not one to  be easily pleased with myself. Shameless self-promotion aside, I really enjoyed Elle Fowler’s “February Favourites” video at the beginning of the week. She was the first beauty you tuber who I began to follow and to this day I do enjoy her videos – she has dry skin like I do, is a reading fanatic and talks about her sleep issues so I pretty much had to enjoy watching her. She might not post tons but I do really enjoy her recommendations, although my wallet might not necessarily. And on the post front, Amelia Liana’s “Anti-Fatigue Makeup” was an enjoyable one.

Er, now I suppose I should be getting to the beauty product loves of the week and thankfully I kept it quite edited so this post will not end up with the word record for being the wordiest blogpost in history. I’ve been wearing the bright watermelon pink Tarte Natural Beauty Amazonian Clay Blush ($31) and with less time to get ready in the mornings, this has been a quick way to add some vitality back into the face. It’s not my favourite formula ever but it does last for ages and will not emphasize texture or anything so I suppose I can’t complain.

After showing it in a post earlier this week, I haven’t put the MAC Layin’ Low Paintpot($24) down. The matte medium warm-toned brown shade has been really versatile and although it’s not infallible as a primer, it performs slightly better than the popular Maybelline shadows and has some more versatile shade options but still keeps makeup crease-free for much much longer – my eyes are naturally really crease-y and creasing is an issue for me regardless. The shade is nice on its own and I also love putting shimmery shades on top because then the look isn’t overkill. It’s safe to say that I kind of have a cream eyeshadow obsession at the moment…

Last night’s time change is killing me but nevertheless happy Sunday (if there is such a thing)!

What were your standouts from the week?