It’s amazing how irrational we can be when taxing matters are involved. I have a confession; I don’t clean my makeup brushes anywhere near the minimally recommended and required amount and I tend to be rather delusional about it. Case in point, I haven’t been feeling my eye makeup for a week or two, noticing that it was looking rather muddy but that little voice in my head that allows me to hold on to my sanity was determined to convince me that it wasn’t. Well it was. And I finally convinced myself to clean a few of my brushes and make some effort. The laborious task was worth it, let me tell you. However the amount of product that emerged in the sink during the washing process was borderline terrifying. Is anyone as lazy as me?

I’ve been in more of a smoky eye mood lately and today I was surprisingly happy with the subtlety of the result. As I have been in the last couple of days, I pulled out my longtime pre-blog favourite but now oft-neglected, Make Up For Ever HD Foundation and I’ve been really enjoying it for its skin like finish and ability to smooth over texture imperfections of the skin. I know many seem to say that the ever-popular foundation emphasizes dry patches but I don’t find this to be true in the slightest. As I seem to have this compulsive need to add some shape to my face, I pulled out the subtle offering by Rimmel and of course I topped it with my current “blush” love the warm coppery Maybelline Hi-Lighting Bronzer in Deep Bronze – I’m sure you’re sick of me talking about this but it’s deserving of every mention and more. For my chapped and worse-for-wear lips I put on the effortless warm nude that isn’t actually any paler than my lips, MAC Patisserie.

Knowing me, it shouldn’t be a shock that a, I didn’t make a huge departure from my go-to shades and that b, I used the Naked Palette for the daytime smoky eye in question, however I did something different, placing Toasted all across the lid, only putting my typical go-to shade, Sin in the inner corner. Keeping with the warm theme, Buck went in the crease but was then followed with Smog in the outer portion and Darkhorse was the finishing shade, blended into the outer corner and lower lashline. I had been planning to wear the Rimmel brown liner in both the inner rims of my eyes and on the lash lines but due to it’s waxy texture, I can never get it to transfer onto the waterline so I went for my Lancome standby I’ve had for ages. The Rimmel liner is one product that I do not understand the hype of for the life of me. On the mascara note, I doubt you even need to ask.

I was surprised with how the makeup turned out – the eyes were subtly smoky while still looking awake and the skin had a nice warm glow. And the lipstick of course was divine. I devote an entire book to my love of Patisserie… 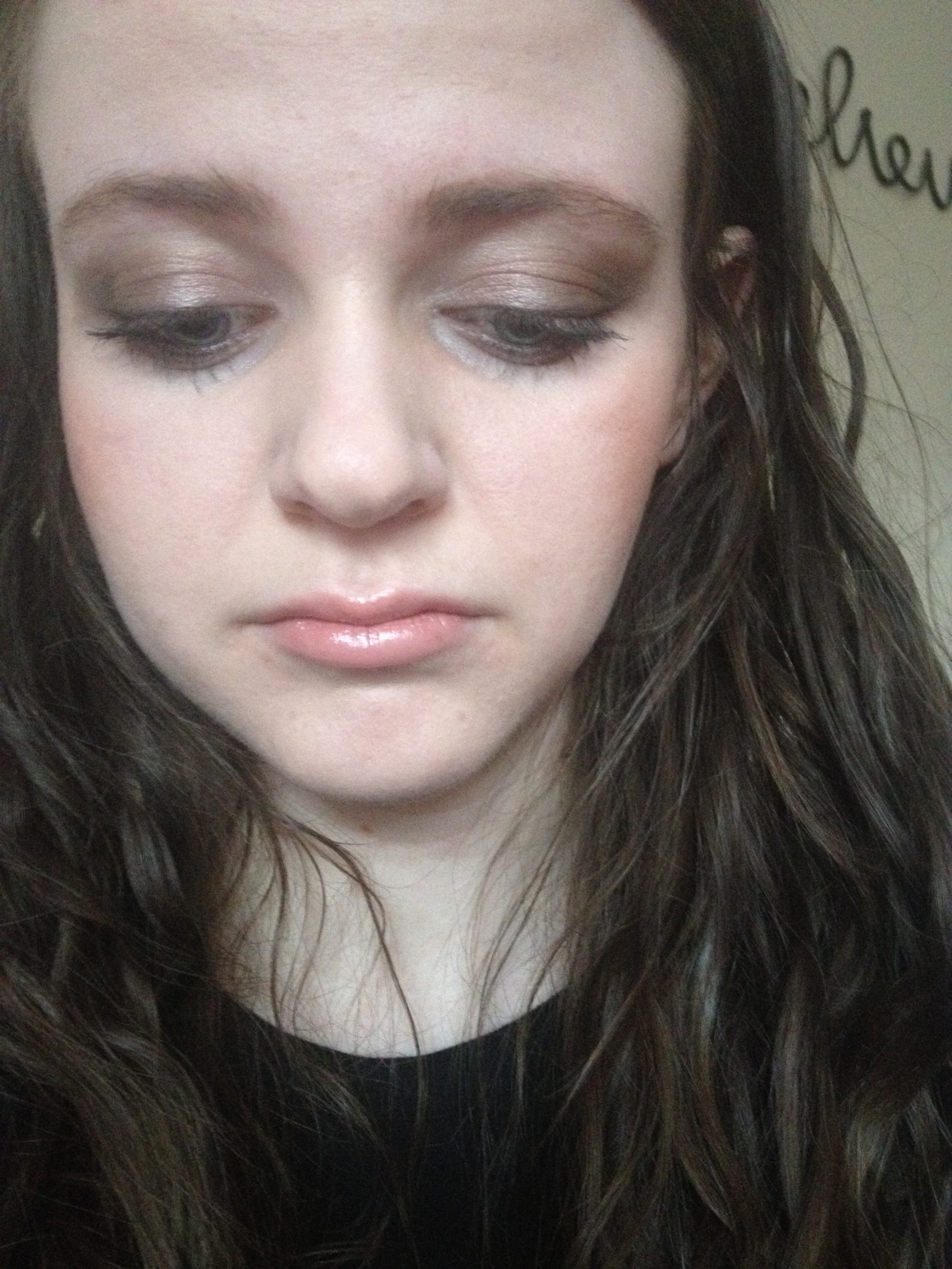 Thoughts? What makeup have you been reaching for lately? 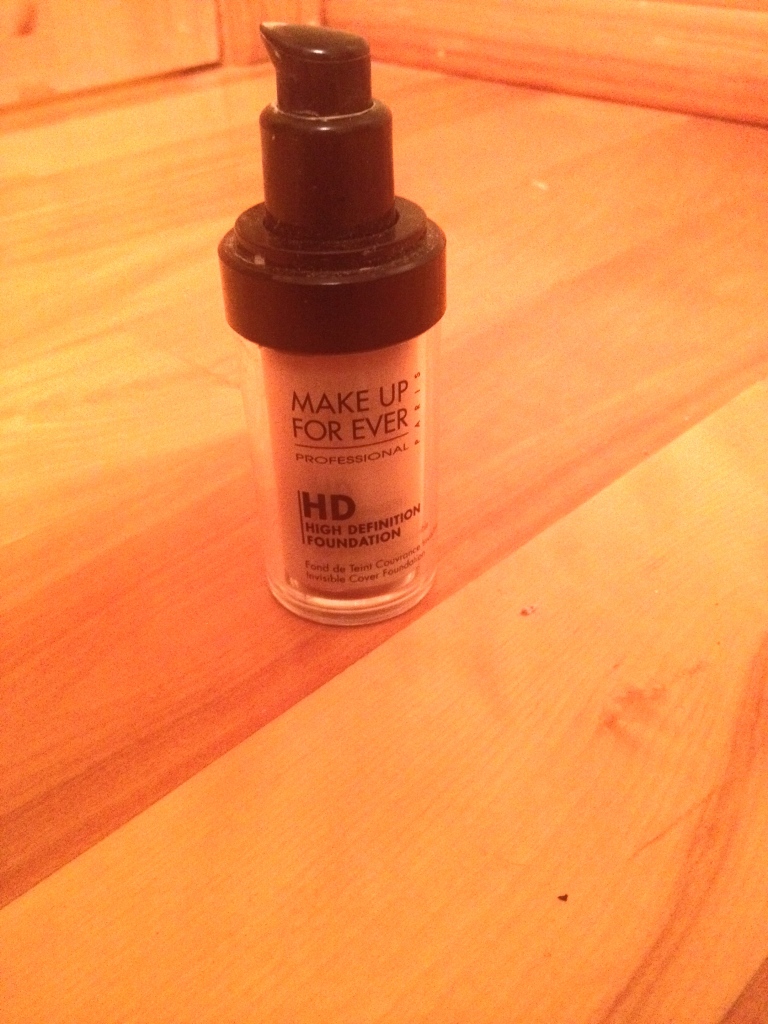 From the beginning of 2012 to the middle of 2013, I wore Make Up For Ever HD Foundation pretty much exclusively ( to wards the end I had LM Silk Creme but wore it like once a month) and I can easily say that this is a great foundation.

According to the Sephora website, <strongMake Up Forever HD Foundation claims to provide buildable medium to full coverage that conceals imperfections “flawlessly” with a soft-focus effect, remaining invisible both on film and in real life.

On the coverage front the product is spot on and the finish is rather interesting; initially providing a velvety-satin finish but has more radiance in sunlight and as time goes on.

I would hesitate to say its invisible in real life and on film. It has no SPF and photographs beautifully. It’s hardly detectable and I’d say the same about it in real life.

This foundation has a thick viscous fluid texture. The finish is pretty natural (but with a hint of radiance) but unfortunately highlights severe dry-patches. Despite it’s texture, it blends beautifully and sheers out like a dream.

I’m wearing shade 115 which is slightly too pink-toned and pale for me but the shade range is fabulous, catering to very fair to deep skin tones in various undertones.

According to COSDNA, there are no particularly troubling irritants in this but we each have our own skin sensitivities. It does contain a small amount of fragrance though.

Across the board, this foundation has great longevity, just not as great as foundations like Revlon Colorstay etc. Oilier skin types may need to touch up with powder and to blot but there don’t tend to be significant issues with wear (my friend provided me with this info) but on my drier skin it lasts a very long time. I accidentally had it on for 18 hours on the night of my prom and it hardly faded but on the down side it settled into my dehydrated patches unattractively (keep in mind that I have dry and dehyrated skin).

The packaging is somewhat large but is not particularly fragile. The container features a functional pump that dispenses a rather practical amount of product with a matching black cover. It contains the standard 30 mLs of product.

This is a great foundation, suitable in my opinion for normal to combination skin. I find it highlights dryness but not to a severe degree and those with truly oily complexions may not find it controls oil well enough. It’s a great special occasion foundation that photographs beautifully. The formulation is concentrated, requiring a minimal amount for significant coverage. It can be built up without becoming significantly more obvious and also looks relatively natural in real life.

For anyone who is curious and some have you might have guessed because of the title, I plan on doing a series of foundation/concealer reviews and uncreatively calling it “base bonanza” of all the face products I own and then do a comparison and favourites post. Fingers crossed, I’ll be able to stick to this.

In the last few weeks I’ve been trying to be creative and make more use of my neglected Naked palette. The thing is I tend to find the palette too shimmery and too warm to be a palette to use for a bunch of different whole looks but I’ve been managing to create a few that I’ve liked. This one has by far been my favourite as I think it’s really pretty without being overdone, defined and versatile. This is the kind of makeup that I find suits casual days to going-out nights. It’s nothing spectacular, I just thought that I would share! 🙂

If you don’t have the colours I have, I’ll try to give some alternatives at the end; there’s nothing I hate more than a look I like but own none of the colours for.

1. I primed my eyes with Primer Potion and then I used the brush that comes in the Naked Palette to pat a good amount of Sin on the inner half of the lid and Toasted on the outer half and then blended the edges together.

2. So I sort of cheated a little – I used one shadow not in the Naked Palette. I used the darker shade of Nars Kalahari (the right side) in the crease with a fluffy blending brush.

3. I filled in my brows lightly with Buck on an angled brush.

5. I applied Hustle into the outer-v and then blended outwards with my MAC 239.

6. Using my angled liner brush again, I applied Hustle underneath my eye in the outer corner.

7. I lined my upper lashes with same brush using Darkhouse and smudged it. I also applied some on my MAC 239 brush and used it to darken the outer v.

8. I highlighted the browbone and brightened the inner corner with Virgin.

9. I used L’Oreal Voluminous mascara on my upper lashes.

I’m sorry but I maybe sort of used the same cheek and lip products as in the other look … but at least its proof of their excellence? 🙂

10. I used Rimmel Wake Me Up in 100 for my foundation which I really like the colour match for my skin, the glow it provides, its lasting power and that it’s not too noticeable.

11. I put the second-lightest colour of Make Up For Ever 5 Concealer Cream Palette – my shade is 1- underneath my eyes and onto rather pronounced blemishes.

12. I used Rimmel Natural Glow Bronzer in 021 on my cheekbones, forhead, temples, nose and blended it into my neck to bronze my face up slightly with a large blush brush.

13. I placed MAC Stereo Rose MSF on my cheeks with the same brush, blending it into the bronzer. I know this is LE, but I’ll talk about other options below 🙂

14. I put the tiniest bit of Benefit’s Girl Meets Pearl highlighter on the tops of my cheekbones.

15. With my finger, I dabbed some Bobbi Brown Rose Pot Rouge onto my lips.

This sounds long but it wasn’t and was rather quick and easy!

Nars Kalahari (Darker Shade)  – I can’t think of anything extremely similar but UD Buck could be used in its place (if you’re warmer), MAC Charcoal Brown or Espresso – these are both matte although Kalahari has a sheen

UD Darkhorse – Any brown darker than Hustle would work, I’ve heard Nars Cordura is similar, MAC Handwritten is similar without the shimmer but ever-so-slightly warmer, MAC Embark and Smut are also similar and they have some sheen to them